The National Saved My Life

It might be overstating things, but a chance meeting with The National in a cramped bar turned my life around.

I'm glad I'm not the only one that had a visceral reaction to this band. I needed something to be excited about when I heard them. I'd listened to their third album Alligator once or twice before, liking it and all, but when I went to see them, they stirred me to my flimsy core. I was actually mad that so few people showed up to see them, this glorious thing that was gracious enough to stop here, mad enough to do something. I went up to some folks I knew who were starting a local lifestyle glossy and informed them I was going to be their music guy, that I cared for some perverse reason, about rock-n-roll and wanted to see it continue, and got the job. Now, success is measured in a number of ways, and column inches and checks are sometimes equally thin, but I feel I make a difference. And if you listen to those supposed miserable moments Matt Berninger doles out in his whiskey-perfumed baritone, it's all he wants - to do some good. The pursuit, the failures, the self-hate and revelry of jousting windmills is the best. I become Mr. November off Alligator, 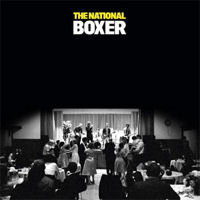 staggering down the street of my self image bellowing "I won't fuck us over" to the air. It's beautiful, and I thank The National for their part in that.

So I waited for that which became Boxer with trepidation and anxiety. How do you follow up a record that inspired a wretch like me to follow his dreams? What could feel better than yelling along with "Lit Up" on the way home from the job I was about to lose weeks after that fateful concert?

A year and a half later, I'm still following the trajectory of that moment, perhaps with a steadier and more calculated footing than my initial blot out the gate, and here comes Boxer which refines all the things I love about Alligator, the quietest album I've played at the loudest volume, meeting my strategies with warmth and serenity. "Fake Empire" is as good a thesis ballad as any; pianos and declaratives embracing the lies that propel us forward "half awake in a fake empire." His voice is so resolute, so comforting, I wouldn't be surprised to see it coming out of Abe Lincoln's bust on Mt. Rushmore. Half way through, the drums and guitar interlacing and some violin and synth horn business appear and take this into anthem territory. Elegant and string, fragile and fleeting, I love this song. And that is all in the first three and a half minutes.

"Mistaken for Strangers" is the perfect foil to "Fake Empire's" arc, the wet fish he slaps you and me and himself with so deftly. I remember sitting in a shitty apartment watching a small time drug dealer light match after match with his thumb, waiting for something to happen , when he shocked me by saying "what would Ian Curtis be like if he'd lived, if he'd made it?" and I think The National is the highly optimistic possible outcome. They have that same transcendence about them that gets mislabeled as depressing. Of course it's depressing, everything is depressing. Life is the only thing guaranteed to kill you. But both of these groups can wallow in that mud and come out cleaner somehow, and that is what it's all about I think.

This whole album is a parade of moments like this. Here are the high points.

On "Squalor Victoria" there is a toast in the chorus "raise out heavenly glasses to the Earth!" that makes me want to make that same toast, and make people make it with me.

"Green Gloves" tiptoes in like the lilacs last in the dooryard bloom'd, written by Whitman after Lincoln's death, and I drop an obnoxious reference like that because I think Berninger latches on to the Whitman rush, that life comes in as a quiet barrage and it hits us at all angles, its sadness and joy, its enlightenment and boredom.

"Apartment Story" - I'm almost afraid to listen to this one, should it cast its knowing light on the many pathetic apartment moments I've had, moments that were glorious in an instant and devastating in eternity. "Hold ourselves together with our arms around the stereo for hours." It's easy to give into weak nostalgia, but it's a whole other thing to revisit it like a ghost and find the blueprints for the future in it. And that last second where a guitar is still issuing one last note while the rest of the Swiss clock abruptly stops ticking is like being that ghost and suddenly realizing that the former self you were haunting can see you.

Same with "Guest Room." If you think war of sad stories are played out in apartments, the key battles with the most casualties occur in guest rooms.

One Sufjan Stevens adds his piano styling to "Ada" and there is a bit of his show choir earnestness here, but Matt has stared longer in that bathroom mirror of the soul than our boy has, and that knowing is what gives this beautiful song both its airiness and its unbearable weight.

I could go on, but I won't. I feel like I just watched a movie I equally want you to see and want to tell you all about. It's beautiful and glorious. It's no Alligator, but I'm hard-pressed to find a record since The Queen is Dead that was. It's a way in, a way out and a place to wallow in-between.

Zing! Went the Strings of My Heart...

Try the rule of Ten

Colossal Youth Returns to the Shops

How Do You Make A Movie When You've Got No Money?

So there's this new show on cable called "Californication" on Showtime in which David Duchovny fucks everything that moves. Yeah, that's basically the whole plot.

300 Words From London: Nick Cave At The Wheel

I Saw The Light

No Time Like the Present to Not Present Things

Sweet Procrastination - it is the frosting on the cake of indolence - but it keeps me from telling you about some really good records.

The Neon Meat Dream of the Everyfish: Nona Hendryx does Captain Beefheart

I have a number of friends who hate Captain Beefheart