We Like American Music: Titus Andronicus and The Red Krayola

Jerseyite rabble-rousers Titus Andronicus and arty ex-Americans the Red Krayola each cobble bewildering portraits of the U.S. of A. out of scraps of history and glimpses of the Truth

At least until the new Hold Steady album takes steady hold of the marker with which we scrawl our personal American graffiti, New Jersey's Titus Andonicus are the standard bearers of 2010 Ameri-rock. The Monitor is sweeping, historic, fraught with struggle for free action and identity. It is emo as hell while being anti-emo intellectual. You want to jump your BMX off that dirt hill over and over as it plays until life makes sense.You want the high school football team to brawl with the freaks in a darkened parking lot to it. You want to kiss your girlfriend and run away from home to it. It might even sound poignant if it was playing in the background while trying to make a phone call from the  police station. It is American Music. 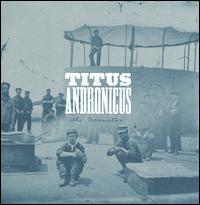 Honestly, you can get this all from the monstrous opening number "A More Perfect Union," seemingly constructed by tossing a high school history text, a Springsteen lyric book and maybe a few old skateboarding mags into the wood chipper and then standing strong against the blur of scraps in the exhaust, but "Titus Andronicus Forever," reducing the spew to repeats of "the enemy is everywhere" has a similar impact. The Monitor is a patchwork of deeply embraced annihilation ("No Future part Three: Escape from No Future", "Theme from 'Cheers'" (not the actual TV show theme)) and over-intellectualized ratty teen outrage against hypocrisy ("Richard II", "Four Score and Seven") all delivered with cannons and raspy throats and loud, loud guitars. It is a melodramatic, Clash-obsessed (possibly 4th-generation-copy-Clash-obsessed but no matter) call to arms for those who think there is nothing to be excited about anymore. There is, so drink up, for I can almost see the whites of their eyes.

The Red Krayola were one of the scrappy units passing around the moonshine in Texas along with the 13th Floor Elevators in the mid 60's inventing psychedelic music. Like all great bands, they devolved into a meta-band around a single figure, soon-to-be expatriate guitar genius Mayo Thompson. On Five American Portraits, Thompson hitches up with frequent partners in destructive deconstruction Art & Language offering stylistic portraits of (in order) cartoon anti-hero Wile E. Coyote, former presidents George W. Bush and Jimmy Carter, actor John Wayne, and ultra-abstract painter Ad Reinhardt.

The lyrics in each are a mind-numbing autopsy-grade descriptions of each of their faces. George W. Bush's portrait begins thus: 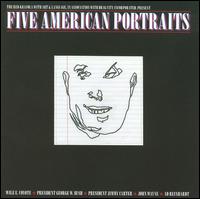 On lyrics alone, the portraits become near identical inventories of atomic facial data, effectively digitizing the great Americans in question, storing them in as a re-creatable recipe that is meaningless without the right chef. Perhaps that is how our vast stores of digital info that we so proudly tout will be in the near apocalyptic future; meaningless without the translation software. I wonder what aliens will make of that laser disc we Americans proudly left on the moon? Perhaps we should drop off a copy of this album on our next trip.

Mayo Thompson's skewed rock 'n' roll serves as our playback schema, depicting Wile E. Coyote in an appropriately bewildered, awkwardly strutting blues; Jimmy Carter in plaintive, hushed upended soul combo that goes to hell at the end (like his administration did) and; Ad Reinhardt, best known for end-of-art black square paintings like the Untitled one above, is delivered up by a patriotic-sounding piano recital, formal yet with a sly smirk, that become a Baroque cosmology the longer the artist is considered.

Five American Portraits is a little maddening, but then the facts always are when they are laid out. In the mediation of facts, the Red Krayola get at sideways sort of Truth About America much in the same way Titus Andronicus do with their history soundbite barrages on "A More Perfect Union." The United States is too big a place to make any real sense of it, and truthfully, its doesn't really react well to sense. The best we can do in life in art is come to a functional understanding and hope that we find that peculiar crack in the shoddy workmanship in which our Truth can take root.

Image of someone trying to explain an Ad Reinhardt painting lifted from here.

Bob Holroyd's Ambient Journey into Where We Are Now

Bob Mould Is Angry All Over Again

You Need this Like a Hole in Your Head

If you only buy one LEGO guide this year, ignore the following 900 words of pseudo-intellectual snarkiness and let it be The Unofficial LEGO¬Æ Builder's Guide by Allan Bedford (No Starch Press)

The Only Game of the Year: Angry Birds

The only game in town

With a big side to side to Cat Power, Joe Ambrose gets all vitriolic on their asses