Writing on the Walls of Death With Dax Riggs

The former Deadboy emerges to save rock 'n' roll with a needed shot of teen death sex energy.

Dax Riggs
We Sing Only of Blood or Love
(Fat Possum)

I still believe in rock 'n'roll like some sad sack Catholic, dutifully traipsing off to mass, hoping the Virgin will one day appear in my oatmeal and make years of devotion and guilt pay off, but my faith weakens with each passing year. The mainstays: Johnny Cash, The Rolling Stones, Elvis, the Clash, the Ramones, The Replacements - whatever pilings to which I would tie my spiritual dingy are all showing sings of rot. And they are supposed to - rock 'n' roll is not built to last the ravages of time. Well, maybe Led Zeppelin and Black Sabbath were; never underestimate the lasting power of British Steel. What gets me through the night are not grand crumbling temples of rock, but the little antennae that crop up broadcasting the original teen sex death energy as long as it can before the winds topple them over, and the latest signal to which my dial is tuned is Dax Riggs.

Riggs is the Neil Diamond-rich former voice of last year's phenom Deadboy and the Elephantmen and former metal casualty of cult demon cabal Acid Bath. He also happens to be from my nowheresville hometown of Houma, LA. He came up in the apartments by the mall a number of years after I came up in the apartments by the K-Mart. Somehow, Riggs manages to scoop up the Zeppelin and Sabbath worship that still cripples the youth of towns like ours, mixes it with the rebel yell protest of metal, punk, new wave and apocalyptic folk rock and creates rock music of Zarathustran stature, standing before the misty mountain, blinking at us before it disappears into its foggy crags forever. 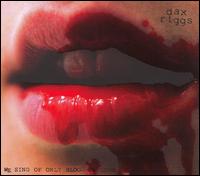 This massive record opens with a plaintive power ballad with the perfectly ridiculous title and chorus "Demon Tied to a Chair in My Brain." Astute listeners will immediately hear the brilliant production of Matt Sweeney, who coaxed some weedy rock splendor out of Will Oldham a couple years ago on Superwolf. Riggs knows the formula like the way apartment kids do the 7-11, kicking "demon" into rock overdrive at the end. Riggs has the best rock vocals going - he could give all Stone Temple Pilots-in-training directions to Jim Morrison International Airport. See the ragged spooky kaleidoscopes of "Didn't Know Yet What I'd Known" and "Night Is the Notion" where he croons up through the smoke as if he's searching for air.

The real shit, though, is "Radiation Blues," an improbable perfect rock monster. Blacker than any Crowes, bearing more rusty guns and thorny roses than all the democracy in China, stoking the fires with "there is only death" before the wild stallions of this song trample the earth. Two-and-a-half minutes of lost rock brilliance. I'm going to sit here and listen to it again as you pull it up on his MySpace page.

"Terrors of the Nightlife" is a synthy, goseplly interlude and is one of the few missteps here, not because he can't carry the vocals or anything, but because his constant devil/apocalypse imagery is better served by either a blown Marshall stack or a ragged pawn shop acoustic. "Truth in the Dark" is as abrupt a change as being knocked over by a skateboarder on the sidewalk, followed the slow-rising dark tide of "A Spinning Song." His adolescent death shtick is positively contagious - I want to scribble a pentagram on the back of my laptop, like I did my Converse lo-tops back at that apartment complex.

"Ouobouros" is his first acoustic foray here, and the "Ramblin' Rose" Neal influence is all the more palpable. He chants "tonight, I ain't got time to die" with a smile that totally works. "Living is Suicide" is a great teen sex death anthem, building up like stockpiled hormones ready to explode when the guitars build up. If I ever decide to go out in a game of chicken, hysterically weeping at fate, I'll put this song on the stereo. And as my cartoon spirit leaves the wreckage as assembled rubberneckers scratch their heads wondering what that old fat guy was thinking, "Ghost Movement" will play, echoing like The Band in its first half, only to kick into the intoxicating punk section when I am deposited unknowingly in Limbo, set to run screaming forever.

"Dog-Headed Whore" along with bearing the best title of a song I've heard this year, is his second death-soaked acoustic ramble. It sounds like the guitar is strung with barbed wire, and the stomp that accompanies it surely comes from a cloven hoof. Then, from the last flickering light o the horizon comes the real teen anthem "Wall of Death." The incongruous juxtaposition of the song's chugging sonic positivism with "let me write ride on the on the wall of death one more time" is ridiculously perfect. I don't know Riggs, having only met him once after he was already a famous Deadboy, signing off enthusiastically on my Neil Diamond comparisons, so I don't know how funny these songs are meant to be, but his way with melodrama is masterful. The dusty-road ramble of "Scarlett of Heaven nor Hell" is a further example.

Like all classic records, it closes with a torch ballad. Riggs' voice has a smoothness that could make Rufus Wainwright hang up his vocal chords on "If All Death Is as Bright." The song is the perfect make out at the post-apocalypse prom, the disco ball refracting the encroaching radiation fires flickering onto the gymnasium walls; the chained doors straining as the zombie hordes bang on them form the outside. This may be the last song, baby, so let's get close.

(Ed: Busted! Not only did I mix "ride" for "write," but I failed to notice that "Walls of Death" is a Richard Thompson song from Shoot Out the Lights, and makes much more lyrical sense with that correction.  So much for the tacit critical adoration of Richard Thompson! Thanks for the correction, Alex.)

On a TV screen near you

With the release of his new record, Sun Piano, Laraaji is all fun, philosophy and full on happenstance...

The Heart of the New Saturday Night

from the toon traveller, exiled at home, a poem for Covid 19 release day

Niche: A Memoir in Pastiche

Momus lauded by the stars

Down in the Lab

Residency: Kitty and the Kowalskis

English Tapas is the first Sleaford Mods album for Rough Trade - Does that herald a better class of track pants? Jason Lewis finds out...

No Cowbells Were Harmed in Tonight's Show